Arizonahealthspot.org is all about healthy living, fun, and positive health and community news.  We NEVER recommend that you DIET.  We recommend that you eat healthy, stay active, and live a healthy lifestyle.  Diets are usually more destructive than helpful, whereas lifestyle changes and a better choice of foods, are the keys to looking good and feeling good.  Here is a story shared with us from the Valley Schools Employee Benefits Trust (VSEBT) Wellstyles February 2013 Monthly Newsletter, edited by Rebecca McGonigle.  Thank you VSEBT for all the great information you provide!

The key to a slimmer figure is not necessarily dieting, but just cutting back on fat intake, a new British study suggests. Researchers from the University of East Anglia found that simply replacing high-fat foods with low-fat alternatives helped people lose roughly 3.5 pounds. Reducing fat intake also resulted in lower blood pressure and improved cholesterol levels. The study authors suggested that the findings may play a critical role in global dietary recommendations, because being overweight or obese increases the risk for many cancers, heart disease and stroke.

The researchers reviewed 33 randomized, controlled trials in North America, Europe and New Zealand that involved over 73,500 men, women and children with a variety of health histories. A randomized, controlled study is one in which people are randomly assigned to different groups: one group receives the treatment and the other does not receive the treatment (the “control” group).

For at least six months, the investigators compared the weight and waistline measurements of those who cut back on their fat intake with the same measurements of those who did not alter their eating habits. In addition to losing weight, the study found that eating less fat reduced the participants’ body mass index (BMI, a measurement of body fat based on height and weight) and waist circumference slightly. The researchers pointed out that none of the participants were dieting or trying to lose weight, and they added that the weight came off quickly and wasn’t regained for at least seven years.

“The weight reduction that we found when people ate less fat was remarkably consistent—we saw it in almost every trial. Those who cut down more on fat, lost more weight,” study leader Dr. Lee Hooper, from the university’s Norwich Medical School, said in a journal news release. “The effect isn’t dramatic, like going on a diet. The research specifically looked at people who were cutting down on fat, but didn’t aim to lose weight, so they were continuing to consume a normal amount of food. What surprised us was that they did lose weight, their BMI decreased and their waists became slimmer,” Hooper added.

One expert explained why fat calories are the worst. “Fat calories are more dense, and the fat that we add to food is usually palatable, increasing our desire to want to eat more,” Sharon Zarabi, a nutritionist and fitness trainer at Lenox Hill Hospital in NYC. “So, figure you decrease your fat intake, which decreases your total caloric intake and [leaves] you less likely to crave and overeat.”

Although the study did not differentiate between types of fat, Hooper’s team pointed out that cutting down on saturated fat is the healthiest approach since it reduces the risk of heart disease and strokes. “This means having low-fat milk and yogurt, cutting down on butter and cheese and cutting the fat off meat,” noted Hooper. “Most importantly, have fruit instead of fatty snacks like biscuits, cake and crisps. And remember, this isn’t a diet, so don’t take it to extremes, but work out a way of eating that you can stick to permanently.” 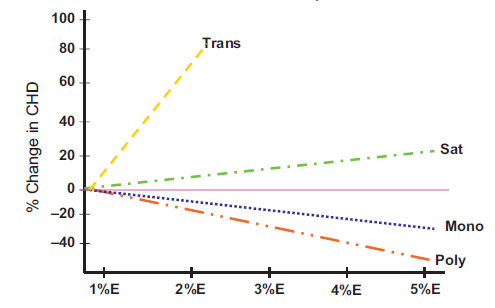 Study co-author Carolyn Summerbell, from Durham University, said, “A healthy diet is a way of eating that people can sustain over time. That’s the trick, to find a comfortable way to eat that you can stick to for life, which helps you maintain your weight. Cutting down on fat will help.” Zarabi put it this way: “You are what you eat. Put the cheap fuel in, and you’re left with low-quality health.”

The researchers said more studies are needed to investigate the effect of reduced fat intake on body weight in developing countries, as well as in children.