A study of nearly 2 million people in Britain suggests an unexpected protective effect against dementia: obesity in midlife.

The research, published Friday in the journal The Lancet Diabetes & Endocrinology, linked a 34 percent increased risk of dementia among people who had a BMI of less than 20 kg/m2. A BMI of 18.5 is considered to be underweight. Meanwhile, the study findings linked very obese people— those with a BMI greater than 40— to having a 29 percent decreased risk of dementia.

Study authors, from the London School of Hygiene & Tropical Medicine, did not examine the reasoning behind the link, but in a news release, they noted their findings contradict previous research that suggests obesity increases dementia risk.

Researchers collaborated with global data research firm OXON Epidemiology to analyze the study participants’ medical records from the Clinical Practice Research Datalink, a database comprising about 9 percent of the United Kingdom population. Study participants had a median age of 55 and an average BMI of 26.5, which is considered overweight, at the beginning of the study. During an average nine years of follow-up, nearly 50,000 people were diagnosed with dementia.

The authors noted a gradual declining trend of dementia risk above a BMI of 25, which is considered healthy, up to 35 and higher. The participants’ birth year, age of diagnosis, as well as potentially confounding factors believed to increase dementia risk— like alcohol use and smoking— didn’t impact the results significantly, the news release said.

Lead study author Nawab Qizilbash, of OXON Epidemiology, and an honorary senior lecturer at the London School of Hygiene & Tropical Medicine, said further research is needed to identify the reason behind the link.

“If increased weight in mid-life is protective against dementia, the reasons for this inverse association are unclear at present,” he said in the news release. “Many different issues related to diet, exercise, frailty, genetic factors and weight change could play a part.”

“Our results suggest that doctors, public health scientists, and policy makers need to rethink how to best identify who is at high risk of dementia,” Pocock said. “We also need to pay attention to the causes and public health consequences of the link between underweight and increased dementia risk, which our research has established. However, our results also open up an intriguing new avenue in the search for protective factors for dementia.”

Researchers noted in the release that their threshold for “underweight” in the study was 20 kg/m2, which is slightly higher than the BMI usually considered to be underweight, 18.5 kg/m2, to allow for more direct comparison with earlier dementia and BMI studies.

Surgeons at Boston Children’s Hospital have reconstructed the face of a 2-year-old with a rare facial deformity by using 3D printing, wric.com reported.

Violet Pietrok was born with frontonasal dysplasia, a condition that causes certain facial features to widen, and that has been documented only 100 times, according to the National Institutes of Health (NIH). In Violet’s case, the nose and space between her eyes were widened, which caused her skull to become deformed and complicated her surgery.

A plastic surgeon and neurosurgeon performed the six-hour procedure, which required bypassing her nerves and brain, in October, wric.com reported. They said the surgery would have been challenging without the help of 3D printing.

“The value of the model like this is huge,” Dr. John Meara, plastic surgeon-in-chief at Boston Children’s Hospital, said in a video that details Violet’s surgery. “This gives me the ability to see on this model better than I will in the operating room.”

Meara said 3D printing allowed doctors to plan ahead for incisions and bone cuts they would carry out during the real-life procedure.

“For Violet, I actually modified my osteotomies (bone cuts) based on something that I was able to see happening in the model,” he said.

Meara told ABC News that he planned to follow up on the little girl’s progress annually and that she may need revision procedures in the future.

Alicia Taylor, Violet’s mother, told ABC News that since undergoing the surgery, her daughter has been all smiles and has started behaving like an ordinary toddler.

“She’s fantastic. She’s taking it all in stride,” Violet’s mother, Alicia Taylor, told ABC News. “She’s so happy … all the time. If she’s not smiling, she’s generally asleep or throwing a fit.”

Directions: Bring a saucepan 3/4 full of water to a boil, add the noodles and cook until just tender, about 5 minutes. Drain and set aside until needed. In a large saucepan, heat the olive oil over medium heat. Add the onion and sauté until soft and translucent, about 4 minutes. Add the ginger and carrot and sauté for 1 minute. Add the garlic and sauté for 30 seconds; don’t let the garlic brown. Add the stock and soy sauce and bring to a boil. Add the chicken and edamame and return to a boil. Reduce the heat to medium-low and simmer until the chicken is cooked and the edamame are tender, about 4 minutes. Add the soba noodles and soy milk and cook until heated through; don’t let boil. Remove pan from the heat and stir in the cilantro. Ladle soup into warmed individual bowls and serve immediately. 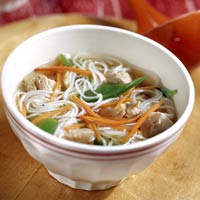